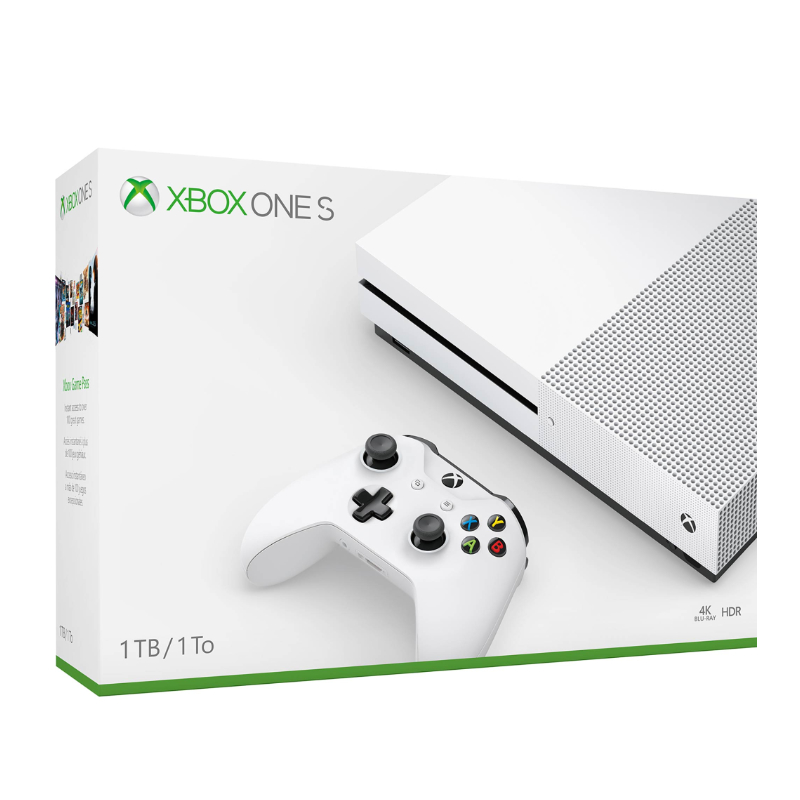 Door Delivery
Shipping KSh500.00
Delivery by 24 Hours when you order within next 20hrs 8mins

Pickup Station
Shipping KSh500.00
Pickup by 24 Hours when you order within next 20hrs 8mins

Xbox One S is an elegant looking game console that’s smaller than the Xbox One and which gets rid of the gigantic power brick. It can display 4K video through streaming devices as well as Ultra HD Blu-rays while supporting HDR contrast via games and videos. The upgraded console also works with Bluetooth. It has a dimension of 11.6 x 8.9 x 2.5 inches and features a storage of up to 1TB while being equipped with Cortana, Bluetooth, and built-in power bricks. The console is further powered by an 8-core AMD Radeon custom CPU clocked at 1.75GHz, a 1.23TFLOPS GPU, and an 8GB DD3RAM.

Xbox One S has embraced a smaller and cleaner design while being 40% smaller than the Xbox One. The impressive fact is that it now has an internal power supply while being stark white and containing sleek plastic moldings that flank the whole box. It can stand vertically and comes in the dimensions of 11.6 x 8.9 x 2.5 inches. With components being shifted to the inside part of the console, the shell has undergone several changes. Two physical buttons are located in ln place of the capacitive touch buttons while the sync and USB 3.0 ports have been moved from the side to the lower half of the front face.

The backside hosts: an HDMI In port that allows users to pass a cable box, two USB ports, an HDMI out, an S/PDIF, and Ethernet ports. The front hosts an IR blaster that allows users to turn on other devices such as an audio/video receiver and a TV. The standard Blu-ray disc has been swapped for a 4K, HDR-capable one that can be able to read Ultra HD Blu-rays.

Similarly to the Xbox One, the Xbox One S continues the tradition of having several ports. It features the HDMI-in and-out ports to make use of Xbox’s live TV integration. The game console supports optical audio, has two USB ports, supports Ethernet, requires an adapter, and has an IR blaster for controlling or power on other devices. The HDMI output is upgraded from 1.4a (Xbox One) to 2.0 and can output proper 4K at 60Hz. Worth noting is the removal of the once present Kinetic port.

The console has been powered by a specked 8 core AMD Radeon custom CPU that is clocked at 1.75GHz and a GPU with 1.23 TFLOPS peak. the chipset is the same as that of its predecessor but the GPU has been interestingly upgraded from 853MHz to 914MHz.This increase brings about an improvement in performance and allows the console to handle the strain of HDR games. The graphics have been improved for several games due to the increased eSRAM bandwidth and GPU. The duo combination produces a graphic output of 218GB/s comparable to the Xbox One’s of 204 GB/s.

The newly introduced feature that helps with the performance and can assist users immensely is the Cortana. It works like Siri on iOs and can field several commands. It’s a better way of controlling and navigating the console and is an upgrade from the previous Kinetic –only voice command.

Gamers will be able to enjoy an expansive storage space with the upgraded console that comes with a 1Terabyte internal hard drive to support available apps and games. The console also constitutes an 8GB DD3RAM that aids in enhancing high efficiency.

Gamers will be able to enjoy the ease of intensive gaming levels with the new accessories aligned to Xbox One s. the accessories oriented with it are Bluetooth headsets, media remote, and a charge kit.

The Xbox One S features controllers that area almost exactly similar to those of its predecessor but it contains small improvements. It is the first of Microsoft’s to support Bluetooth thus slashing the need of a USB receiver. The controllers also have a powerful wireless antenna and changed textured grip that makes it easier to hold for lengthy periods.

Thanks to the backward capability, the Console can play most of the Xbox 360 games which come as an added advantage for gamers. The Xbox One S has games for every member of the family and includes Forza Horizon 4, FIFA 19, Disneyland Adventures, Rocket League, Zoo Tycoon, etc.

Similarly to its predecessor, this gaming console can easily connect to the internet wirelessly in just a matter of seconds. It has a built-in Wi-Fi 802.11n Wi-Fi Direct which allows the gaming system to automatically connect to the router.

Microsoft Xbox One S
KSh43000.00
Questions about this product?
Login Or Register