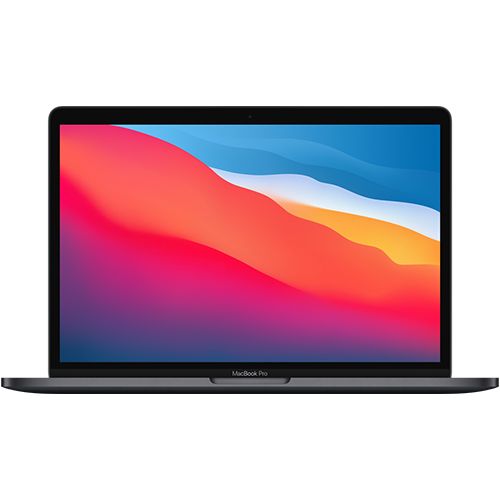 Door Delivery
Shipping KSh1200.00
Delivery by 24 hours delivery when you order within next 20hrs 8mins

Pickup Station
Shipping KSh1200.00
Pickup by 24 hours delivery when you order within next 20hrs 8mins

The Magic Keyboard on this Mac Book Pro has a redesigned scissor mechanism that delivers 1mm of key travel as well as an Apple-designed rubber dome that stores more potential energy for a responsive key press. There's also a physical Esc key and an inverted "T" arrangement for the arrow keys.

This Mac Book Pro is powered by a 2.0 GHz 10th Gen Intel Core i5 Quad-Core processor that features a burst speed of up to 3.8 GHz, while 8GB of 3733 MHz LPDDR4x onboard RAM helps to ensure smooth multitasking and also allows the computer to quickly access frequently-used files and programs.

You can store your data on the available 512GB SSD worth of storage. If you want to add external peripherals, 4 Thunderbolt 3 ports support bi-directional transfer speeds of up to 40 Gb/s, while also supporting 10 Gb/s USB 3.1 and device charging. Buy Apple Mac Book Pro 13 inch 2020 M1 Chip online at best price in Kenya at Zuricart

This device has an M1 chip with an 8-core CPU and 8-core GPU and 256 SSD storage. It also has a 13-inch-inch Retina display with True Tone Technology. It is also the most powerful and most exciting model of the line so far. It has a 13.3-inch diagonal LED-backbit with IPS technology; 2560-by-1600 native resolution at 227 227 pixels per inch with support for millions of colors.

The laptop has fans. It has dimensions of 0.61x11.97 inches and a weight of 3.0 pounds. It also looks and feels identical to the previous model. It has a thin touchscreen that runs along the top of the keyboard and shows context-sensitive buttons and shortcuts.

It has a screen with a Retina resolution of 2560x1600. This results in sharp and detailed images. The screen is vibrant and bright. It also supports the P3 wide color gamut, which offers excellent color reproduction. This is essential for the photographers and video editors who need true-to-life colors.

The M1 chip on the Apple Mac-book Pro 13inch 2020 improves its performance. Its CPU is 2.8 times faster at building Xcode projects and delivers twice as fast vector performance in affinity photos, Plus5.9 times the 3D which renders speed in Final Cut Pro, and 2.9 times the performance in shadow. The device still has fans unlike the Mac Book Air (M1,2020) which runs silently. The fans on the Apple Mac Book Pro 13inch 2020 M1 chip kick in after a while when you are doing some strenuous work on the device. The laptop gets warm towards the back at times.
The video editing performance of the Mac Book Pro 13-inch (M1,2020) is remarkable, with its 8K video editing a possibility with the M1’s GPU.

The battery life of this device is amazing. Normally, powerful devices have to make do with short battery lives, but this Apple Mac Book Pro 13inch (2020) manages the balance performance with a battery life that can last beyond the whole workday. Its battery can last up to 17hours on the wireless web, up to 20 hours of Apple TV app movie playback. Its built-in 58.2 watt-hours lithium-polymer battery and 61W USB-C Power Adapter.

When it comes to ports, the device sticks with just the two Thunderbolt 3 ports which are both on the left side, and an audio jack port on the right. It has a 3.5mm headphone jack.

The touchpad is spacious and very responsive. It has a Back-lit Magic keyboard with 65 ( U.S) or 66 (ISO) keys including 4 arrow keys in an inverted-T arrangement, a Touch-pad, Touch ID sensor, ambient light sensor, and a Force Touch trackpad for precise cursor control and pressure-sensing capabilities, also enables Force clicks, accelerators, pressure-sensitive drawing, and Multi-Touch gestures.

It simultaneously supports full native resolution on the built-in display at millions of colors and one external display with up to 6K resolution at 60Hz, Thunderbolt 3 digital output, and a native Display-Port output over USB-C. It has stereo speakers with a high dynamic range and wide stereo sound. It also has support for Dolby Atmos playback. The device also has Studio-quality three-mic array with directional beamforming. There is also a 3.5 headphone jack.

It has a storage of 256GB SSD which is configurable to 512GB SSD or 1TB or 2TB SSD and 8GB memory which is also configurable 16GB.