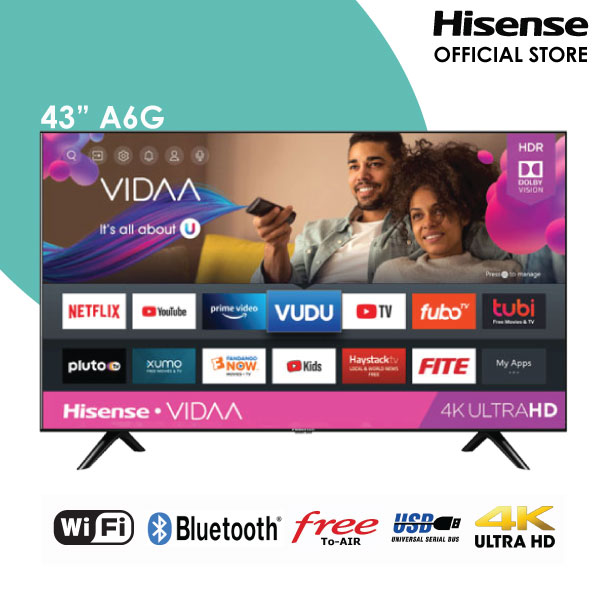 Door Delivery
Shipping KSh900.00
Delivery by 24 Hours when you order within next 20hrs 8mins

Pickup Station
Shipping KSh900.00
Pickup by 24 Hours when you order within next 20hrs 8mins

For the price that it is going for, Hisense A61G is definitely hard to resist. It has similar features to that of Hisense A62G save for the part that this model is a Smart TV while the latter is a Smart Android TV. Additionally, this model also runs on the VIDAA app rather than the Android OS on Hisense A62G.

This TV comes with 4 times the resolution of a regular 1080p HD screen and allows you to cast easily using Chrome cast. Hisense 43A61G is great for gaming thanks to the Auto Low Latency Game Mode.

DTS Multidimensional sound supports the audio for this TV. This model also comes with Google Assistant for voice control. Additionally, It also has a voice remote for opening apps, adjusting volume and searching for your favourite shows through your voice.

Hisense A61G comes with a design that resembles that of Hisense U7G. It has thin bezels and a sleek design that will allow it to fit as a budget model. Its stand has a good design and can easily support the TV without having any wobbles.

The backside is metal on the top and plastic on the bottom section. Its inputs will be placed to the side so as to enable you to have easy access if you would like to mount it. The tracks on the back will be used for cable management. This TV comes with a single slim remote control that is filled with several shortcuts.

This model will have a 4K UHD Resolution which is bigger and better than that of the 1080P screen that was found in Hisense 43A6000F.It comes with four times the resolution of a Full HD TV and additionally has 8.3 million pixels.

Its full array LED backlight creates a sharper and more colourful picture. 4K resolution is able to capture four times the amount of information and unlike 1080p footage, content via it can be cropped, zoomed and reframed without losing quality.

You will get to enjoy Cinema technology right at the comfort of your home with this TV. It comes with Dolby Vision which will allow innovation to run deep as it brings more detail in shadows. In addition to this, it also has visibly clearer highlights and also brings along more vibrant colours.

We have to appreciate the fact that Hisense has also incorporated the DTS sound feature in this model. Previous models such as Hisense A6200f came with Dolby Sound which compresses more of sound and does not support higher bit rates of up to 1.5Mb/s.

The DTS feature also brings entertainment to life by having a scalable and versatile advanced post-processing package. The package creates immersive audio by virtualizing height content over traditional stereos.

The greatest advantage of DTS sound to customers is that it is more adaptable to change and works in several different ways. It is more advanced, has better quality and will definitely be a star feature in this TV.

Gamers will find a friend in the Hisense A61G thanks to its Auto low latency game mode. This mode will be able to adjust your TV settings for efficient gaming purposes. Through it, you will automatically get smooth interrupted play as there is no lag with no effort.

Your Hisense TV will therefore be perfect for gaming as the TV will automatically switch to its lowest latency mode immediately it detects a signal from a gaming console, PC or related devices. By this it will be able to deliver the fastest performance with the least amount of lag.

Overally, Hisense A61G is a good TV. It has a low resolution content that is up scaled well and its image remains accurate at an angle. It comes with a huge selection of streaming apps that gives it an added advantage.

You should buy it for its wide viewing angles and decent reflection handling that make it ideal for watching shows. It however lacks local dimming which you can alternatively find in greater models such as Hisense U7QF.