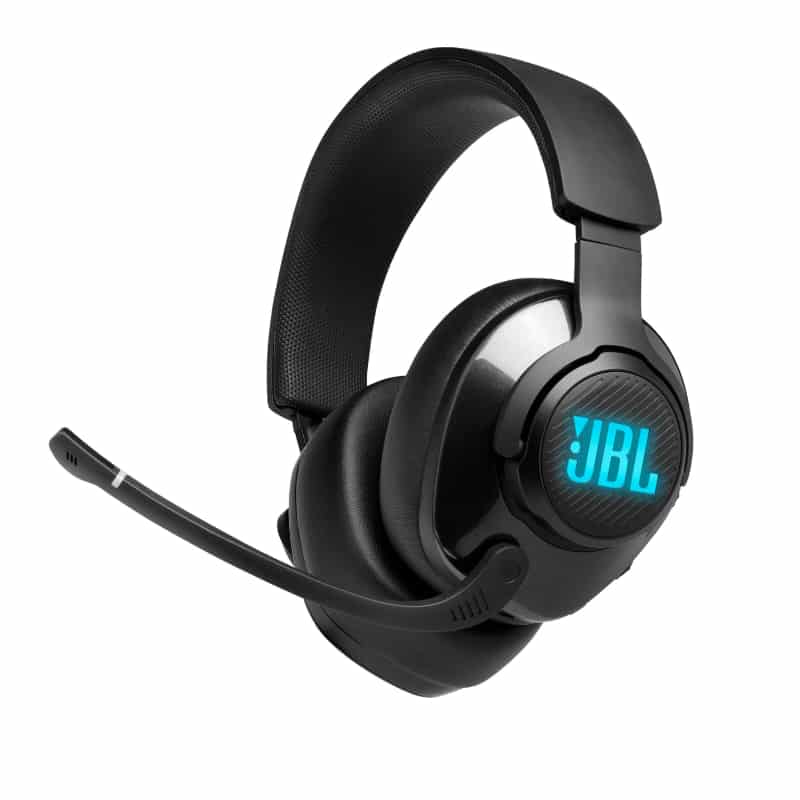 The flip-up, voice directional boom mice come with auto on/off and mute features. Fold-out the microphone to communicate with your friends online. Thanks to the closed design of the ear cups. you’ll be less bothered by ambient noise like a vacuum.

Additionally, you can connect the headset to all your devices using the 3.5mm connector or the included USB-A to USB-C cable.

You can also configure the RGB lighting so that the headset matches the rest of your setup. From the tiniest footsteps to the loudest explosion, JBL QuantumSOUND’s signature makes every scene epic and every game more competitive. Buy JBL Quantum 400 Headphone online in Kenya at Zuricart.

This Quantum 400 headphone has 50mm drivers which provide a 20Hz to 20Hz frequency range that provides deep bass. The combination of the surround, a plane flying over the head or a tank driving by on the digital battlefield will sound extra realistic. On this device, you can adjust the volume of the headset using the buttons on the ear cup. In addition to a 3.94' headphone cable, this headset also comes with a USB Type-C to Type-A cable measuring 9.84'.

Just like JBL Quantum 300 Headphones this device also has a Quantum Sound signature which makes every scene epic and every gamer more competitive.it has 50mm drivers which enable the headset audio to deliver the most realistic soundscape for a competitive advantage in any battle.

The headset has a flip-up, voice focus directional boom mic as well as its auto on/off and mute features. The JBL Quantum 200 headset also ensures you’re heard when you need to be. Its echo cancelling technology gets rid of background noise, for crystal clear communication.

The JBL Quantum 400 is powered by the included JBL Quantum ENGINE PC software. JBL Quantum SURROUND™ puts you at the centre of the most engaging experience, allowing you to up your game and triumph over the competition.