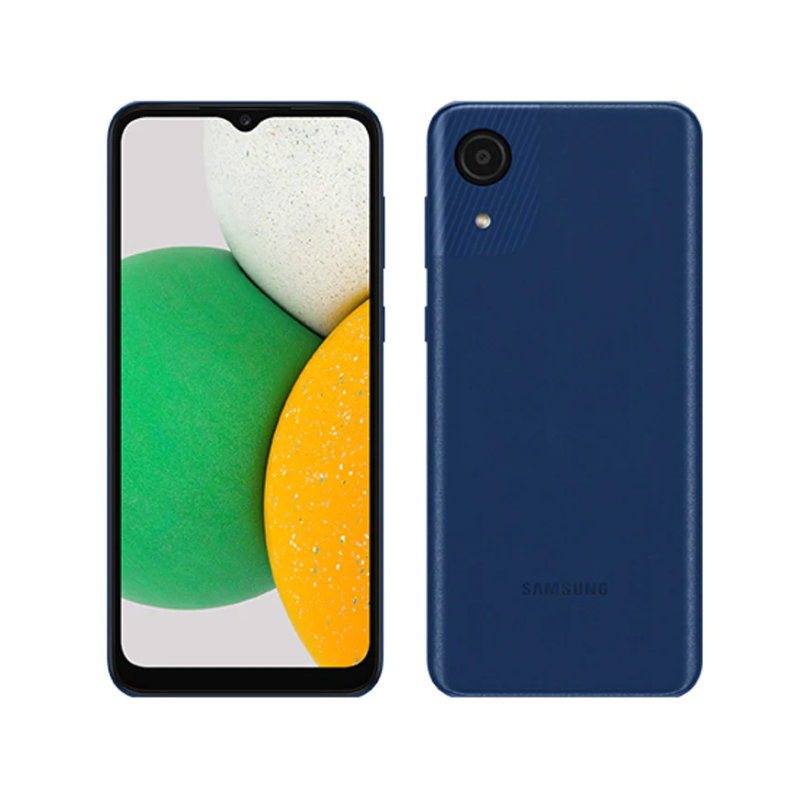 Samsung Galaxy A03 Core in Kenya

Samsung Galaxy A03 Core price in Kenya is 12300 Shillings. Galaxy A03 core features a screen display of a 6.5 inch TFT LCD screen and 720x1600P.  The phone comes in variant colors of Blue and Black.

Galaxy A03 Core takes clear pictures on the rear camera of 8MP and front camera of 5MP suitable for selfies and video calls. The performance of Galaxy A03 Core is based on Unisoc SC9863A (28nm) chipset and Adreno 506 GPU. The phone comes in a single variant of 2GB RAM and 32GB ROM

Galaxy A03 Core price and specs in Kenya

Samsung Galaxy A03 core was released smartphone shortly after the Samsung Galaxy A03s of the Galaxy A03 series. On the 6th December 2021, it was released to the market. It features an IPS LCD 6.5 inches screen. The mobile runs through the Android 11(Go Edition) operating system. For the processor, the smartphone comes with Unisoc SC9863A (28nm) chipset. On the rear is a single-camera as well as the front. There is a large Li-Po 5000 mAh non-removable battery to fuel the mobile.

Galaxy A03 core supports Single SIM (Nano-SIM) or Dual SIM (Nano-SIM, dual stand-by) in a 2,3 and 4G connectivity network. It Connects effectively to Wi-Fi and Bluetooth. Get expandable space of 32GB and 2GB RAM. The smartphone is available in the colors of Black and Blue.

This smartphone is of 6.5 inches’ touch screen of PLS TFT technology. At the top is a small V-cut holding the selfie camera thus giving the smartphone a waterdrop display. Its resolution stands at 720 x1600 p resolution and 19.5:9 ratios with 270ppi density. Therefore, exhibiting similarities with other Galaxy A03 smartphones.

While the device measures 166.6 x 75.9 x 9.1 mm it weighs 211g. Both the frame and back are made of beautiful plastic that is durable and at the same time reduces the chances of ruining the phone upon fall. The front however is glass made to allow easy pressing of the phone.

At the backside in a circular shape is the single camera alongside the LED flash below it. The display screen is uninterrupted only having a waterdrop notch at the top to hold the front camera.

On the right side of the frame are the volume buttons and power buttons. The other side of the frame -left-the micro SD and SIM slot. The top bezel remains bare while the lower one holds the charging port, audio jack, speaker, and microphone.

This device exhibits a complete difference from the Galaxy A03s when it comes to the camera. While the A03s comes with a triple camera set up this one only has one camera. The 8MP camera has LED flash features included to boost its functionality. It also records videos of [email protected] With the LED flash in place, you can always take stunning images in the night times or dark places.

Enjoy selfies with the front camera with5MP power. In case you want to secure your privacy then you can achieve that by setting your face identity through the front camera. The camera has been designed to support face recognition.

The Android 11(Go edition) supports the mobile operation OS which is a major upgrade from the Android 10 in the predecessor Samsung Galaxy A02s. The OS allows you to control apps by permitting downloaded apps on what data to access. It also comes with an in-built screen that records your phone's activities including sound from the mic. Other features include has a dark mode to ensure that the battery lasts much longer. They're also better navigation features that make it easy for you to use this mobile. The best part of the Go edition is that it occupies the least space, therefore, leaving much for proper functionality.

Samsung Galaxy A03 core bears Qualcomm SM4250 Snapdragon 450 (11 nm) chipset with a CPU of Octa-core 1.8 GHz Cortex-A53 frequency. This coupled up with the 3 or 4GB RAM will leave you enjoying the smartphone more.

The Adreno 506 GPU in this phone, manipulates various phone graphics and images to produce the desired output ensuring that you can never get bored of your phone. Further, it gives the liberty and pleasure to enjoy graphic intense games effectively. The mobile's ability to connect to Wi-Fi and available internet makes it easy to play online games conveniently.

As earlier mentioned the smartphone supports face recognition therefore you can secure your data via this. In addition to this is Android locks offered by the OS. The locks include password, pin, and patterns

Samsung Galaxy A03 Core Supports 2G, 3G, and 4G bands allowing your phone to work promptly on different grounds. It supports Wi-Fi 802.11 b/g/n, Wi-Fi Direct, hotspot offering you total relief when it comes to wirelessly connecting numerous devices to the internet. Through the hotspot, you can as well transfer data to and from your device.

The Bluetooth version supported in this smartphone is 4.2, A2DP. You will be able to share files, photos, and documents to other devices once connected. Besides you can connect your phone to audio systems and enjoy a greater and better sound.

Micro USB Type-C 2.0 OTG delivers power to the battery during the recharge. You can also use this port to transfer data to and from your phone.

Sensors in this smartphone include an accelerometer and proximity sensor. There is also a GPS to help you with the location of your smart in case you lose it.

This smartphone comes with an adequate storage option of 32GB internal storage and 2GB RAM. To better things is a dedicated slot to boost the available internal space. With boosted space, you can always enjoy ample storage for your files and photos.

Galaxy A03 core is fuelled by a Li-Po non-removable battery that is fast charging at 15W. You get a similar capacity of 5000mAh in the latest Samsung A12 as the one in this Galaxy A03s. Therefore, this smartphone will take you through a couple of days and still charge to capacity at a speedy rate.

Samsung Galaxy A03 Core
KSh12300.00
Questions about this product?
Login Or Register