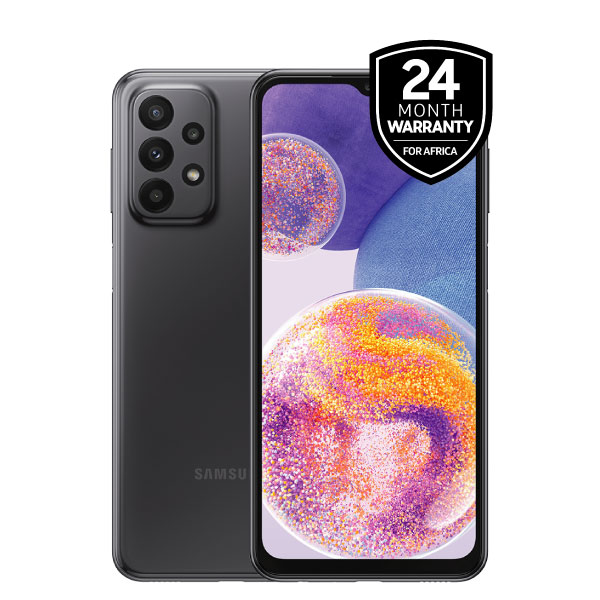 Pickup Station
Shipping KSh500.00
Pickup by 24 hours delivery when you order within next 20hrs 8mins

Samsung Galaxy A23 in Kenya

The phone comes in multiple variants of 4GB/6GB/8GB RAM and 64GB/128GB ROM. Galaxy A23 is available in different colors of Black, White, Peach, Blue,

The camera setup of Galaxy A23 includes a quad rear camera of 50MP+5MP+2MP+2MP and an 8MP front camera suitable for selfies and video calls. The performance of Galaxy A23 is based on Qualcomm SM6225 Snapdragon 680 4G (6 nm) and Adreno 610 GPU.

Galaxy A23 is powered by a 5000 mAh battery capacity and runs on Android 12 OS. Buy Samsung Galaxy A23 online at best price in Kenya at Zuricart

Samsung Galaxy A23 price and specs in Kenya

This smartphone is a successor of the Samsung Galaxy A22. The mobile was announced on 4th March 2022 and is expected to be released later the same month. It has a 6.5 inches screen display with a Gorilla Glass 5.  4GB,6GB or 8GB RAM is what you get in Samsung Galaxy A23 phones while internal storage is 64 or 128 GB internal. The smartphone connects effectively to Wi-Fi, Bluetooth, and up to 4G network bands. On the rear side are quad rear cameras and a single front camera.  There is also a battery of 5,000mAh. The mobile is available in Black, White, Peach, and Blue.

Samsung Galaxy A23 weighs only 195g and has 164.5 x 76.9 x 8.4mm dimensions. The front side of this mobile is made of glass and protected with the Gorilla Glass 5. For the frame and back, you get plastic material thus reducing its vulnerability of breakage upon fall. On the front is a selfie camera that gives the screen a V-shaped notch while on the rear are the quad cameras for quality photos. A fingerprint scanner is mounted on the side which also acts as the power button. On the left side are the SIM slot and SD card space. The lower bezel holds the speaker grill and 3.5mm audio port.

The touch screen in this mobile is 6.6 inches functioning on the TFT technology as that of Samsung Galaxy A13 5G. The A23 has a resolution of 1080 x 2408 pixels offering 20:9 ratios and 400 ppi density. There comes the automatic brightness adjustment thus you can conveniently use the smartphone at any time of the day and in whatever environment. Further is the OS that offers a dark background for your white texts thus clear legibility.

Samsung Galaxy A23 bears quad rear cameras for exemplary photos. The main camera is 50 MP, f/1.8, (wide), PDAF which expands the viewing angle. The second camera of 5 MP, f/2.2, (ultrawide), 1/5", 1.12µm is in place giving you a similar view to human eyesight. Thirdly is a 2 MP, f/2.4, (macro) that clarifies details and a 2 MP, f/2.4, (depth) which can help you edit the background by blurring the objects. There is a LED flash, panorama, HDR features that boost its performance. The Samsung Galaxy A13 bears exactly the same quality cameras.

The front camera is 8 MP, f/2.2, (wide) taking great photos and videos at a similar rate to that of the rear cameras. This is a degrade from the 13 MP in the Samsung Galaxy A22. The front camera also serves as access to your phone because you can use face unlock via the front camera. The rear and front cameras record videos of [email protected] rate.

This smartphone operates through Android 12, One UI 4.1 Operating System. The OS is an upgrade from the Android 11 version in the Samsung Galaxy A22. It is a very personalized OS that keeps the history of most of your operations on the smartphone. With new easy-to-use, powerful privacy features, you’ll have peace of mind knowing that you have control over who can see your data and when. These are just a few highlights of this amazing OS.

With the Qualcomm SM6225 Snapdragon 680 4G (6 nm) chipset, and 120Hz refresh rate the smartphone works at a lightning speed. To ensure that the procession is speedy in this mobile is Octa-core (1x3.00 GHz Cortex-X2 & 3x2.40 GHz Cortex-A710 & 4x1.70 GHz Cortex-A510) Octa-core (4x2.4 GHz Kryo 265 Gold & 4x1.9 GHz Kryo 265 Silver) CPU. For you to enjoy the various graphics on your phone is the Adreno 610 GPU to have a more fulfilling experience. The GPU allows you to customize graphics in this Samsung Galaxy A23. The mobile’s huge RAM leaves adequate space for your installed apps to run effectively even after housing the OS. There is adequate space also gives you a platform to download offline games.

Wi-Fi 802.11 b/g/n, Wi-Fi Direct, hotspot are features that connect efficiently. With this device be sure to be always connected to the wireless network within the phone’s reach. This smartphone is NFC enabled making its connectivity really easy at a close range. There is also Bluetooth 5.0, A2DP, LE much easier. Any device with similar compatibilities will connect to the phone once the Bluetooth is turned on. The phone has a GPS with A-GPS, GLONASS, GALILEO, BDS to guide you on location through your handset as well as trace your phone. A radio FM is software that almost everyone needs in his or her phone to conveniently stay tuned in a live broadcast at any location. This phone comes with one that quickly connects upon tuning and does not need internet connectivity. Sensors in this smartphone include Fingerprint (side-mounted), accelerometer, gyro, and compass

The phone has 64GB 4GB RAM, 64GB 6GB RAM, 128GB 6GB RAM, 128GB 8GB RAM storage options. You can get any of your preferences and be sure they will all work excellently. The huge RAM in this phone is to ensure the mobile works in a speedy manner, no lags and you can install other apps that are not in it. This is made better by the availability of an SD slot to boost the space. In this phone, the space can be expanded up to 1TB.

Just as the case of the previous model Samsung Galaxy A22 this mobile has a Li-Po 5000mAh battery. With the dark mode provided by the OS, the Li-Po non-removable battery will do much better and last more for you to complete all your tasks. The New Samsung Galaxy A13 5G comes with a similar batter with a fast-charging rate of 25W.

The difference between this phone and the Samsung Galaxy A22

Enjoy a more advanced OS with the  Android 12 and a wider view on a bigger screen.

In addition to having a huge battery, the mobile supports a 25W fast charging rate thus taking the least time possible to recharge

Samsung Galaxy A23
KSh24500.00
Questions about this product?
Login Or Register