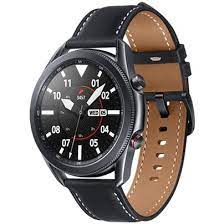 Galaxy Watch 3 was released on 6th August 2020 and it comes in two sizes the 45mm and the 41mm. It is made of Stainless steel frame 316L and it uses a 1.4 inch super AMOLED display with a 360×360 resolution and has a corning GORILLA Glass DX that works as a scratch protector. The watch weighs 53.8g, has a thickness of 11.3mm, and a band size of 22mm, available in two colors black and silver.

It has IP68 which makes it water and dust resistant. The user interface is fast thanks to the Exynos 9110 dual-core 1.15GHz which is compatible with Android 5. The software that comes intact is Tizen OS 5.5 and the OneUI 2.O interface. The watch features NFC, TI AFE4930 health sensor, and loudspeaker. The battery stands at 340mAh and supports 5W wireless charging. Connectivity options include support for Wi-Fi and Bluetooth.

Samsung Galaxy Watch 3 has followed the norm of Samsung which is based on making smartwatches appear similar to traditional watches as per the round face and two round pushers on the side that come with it. As compared to the Galaxy watch which is its predecessor, it comes with a less sporty and dressier design which is more suitable for everyday wear.

The watch has a size of 45 mm with a 1.4mm display which is larger than the other 41mm with 1.2 display size that was launched beside it. It is built of a stainless steel frame 316L and uses a 1.4inch super AMOLED display with a 360×360 resolution and corning GORILLA Glass DX for scratch protection.

The casing of the watch is IP68 rated for water and dust resistance it also has military-grade durability with a MIL-STD-810G certificate The watch weighs 53.8g, it is 11.3mm thick, has a band size of 22mm, and slims down in all dimensions. It has the full color on the display and it comes in two colors the ” mystic black” and the ” mystic silver”.

The watch comes in two versions: the Bluetooth only and the LTE-equipped version. Its advantage over the Active line is its rotating bezel which can be used to scroll through the interface.

The Samsung Galaxy 3 comes with a quite fast user interface owing to the fact that it uses an Exynos 9110 dual-core 1.15GHz processor and is compatible with Android 5.0. The watch comes with a similar processor as that of Active 2 but its RAM has been increased to have a large storage of 1GB RAM and 8GB Internal memory for saving music playlists on the watch directly.

The performance is exemplary and sits at par with recent Apple Watch models. The widgets load quickly and provide users with most of the info that one needs. The software that comes intact is Tizen OS 5.5 while the User Interface is OneUI 2.O.

The 340mAh battery can last up to two days while on average use but it offers some battery-saving tips that limit the screen time-out and turning off location data and therefore saving some battery life. Charging the watch is moderate through the 5W wireless charging and takes up to two hours to fill up.

The watch is also designed to work perfectly under the constrained size of a smart watch screen, this makes it easier to display the widgets and notifications. Through the messaging app, it is possible to display pictures, emojis, and conversation history.

The smartwatch supports 2.4Ghz Wi-fi and Bluetooth v5.0.The Blue tooth connectivity is used to primarily connect with a smart phone while the watch also comes with a 4G LTE at a slightly higher cost.

Apart from the watch being used for its usual purpose it also contains some fitness tracking features. This includes sleep tracking, blood oxygen(Sp02) monitoring, and V02 Max reporting. In case a fall like the Apple watch is detected the watch is fitted with a feature that automatically calls an emergency contact.

Galaxy 3 has several health features that make it outstanding, it has ECG, and Sp02 app which always measures the oxygen saturation in the blood, fall detection, blood-pressure detection, period tracking, and a post-run analysis.